Celebrating the Contribution of Women in our Lives

A woman is miraculous in her own way.

No matter what may come, she stands beside sacrificing her own hay! 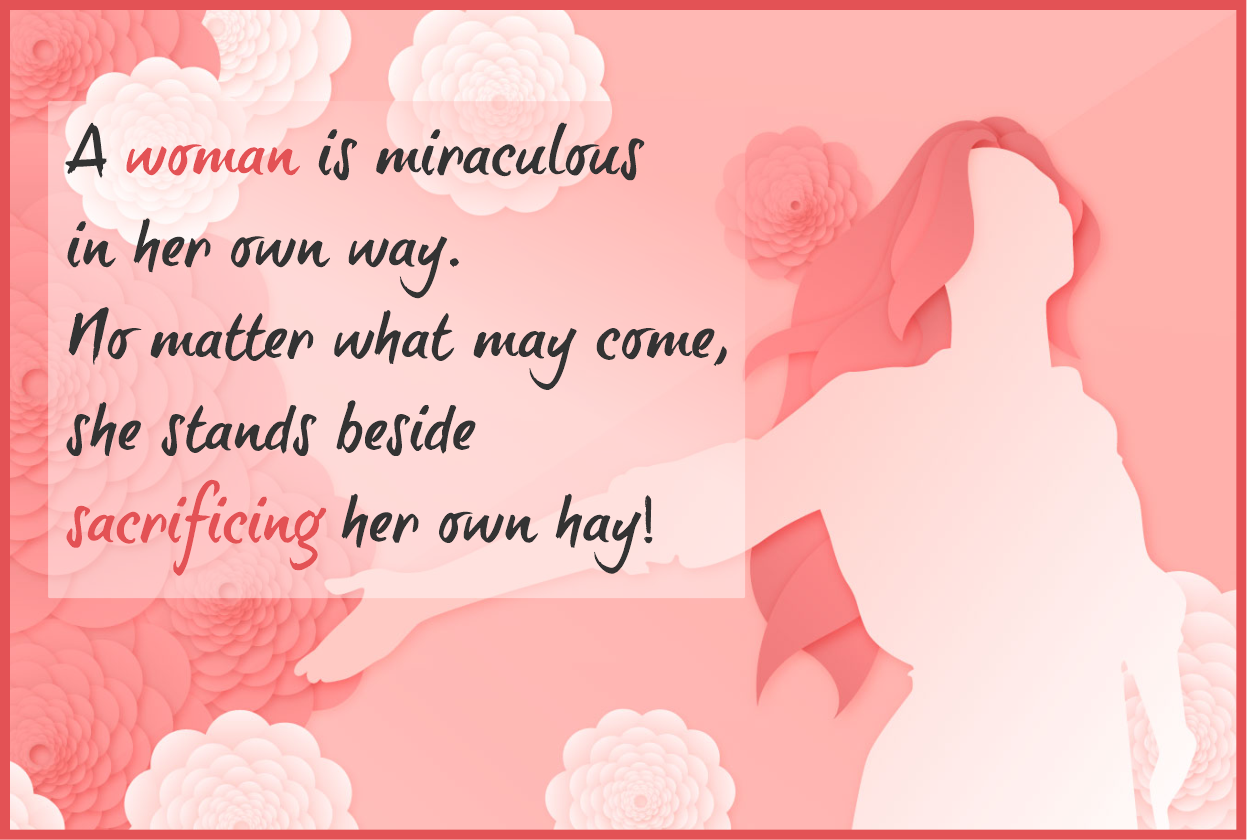 A woman is more important in every way than we ever realize or more than we are ever made to realize and respect her worth. Every March 8, we share posts that connote and denote respect for women which include your mother, wife and sisters. Is that enough? Do we have no more added responsibility to give her days of happiness?

Let’s find answers to all these questions in this piece of writing!

Misha, resident of Uttarakhand, is the only sister to her little brother 10 years younger to him. She loves her brother dearly and have raised him up more like a mother. Her brother is a grown up boy now and has left for hostel. There is nobody in the house who misses the little brother more than Misha. She waits for months to have his brother back in hometown. She wants to talk to him daily and let her brother know how much concerned she is about his safety. What do you think is going on in her life? Does the brother call and speak to her daily or she keeps waiting to hear her brother’s voice. Unfortunately, the latter one is true. Still, she rejoices when her brother is to arrive and have no complaints. That’s the beauty of what a sister holds in her heart for her brother. Tribute to their love and much felt love! Aren’t you proud of Misha’s selfless love? I certainly am!

Wife: a word that in itself has support. Have you ever realized that wives too, at times, can be cranky like little babies out there. Mrs. Majumdar from Bangalore works for a ISRO and is a great scientist. She winds up all her work in the morning by 8 a.m. and rushes to office. Before office, she prepares three different meals and does all her work meticulously. She has two children, a loving husband and father in law residing with her. Even reaching home by 10 at the night, she never fails to smile and talk to her family and discuss how all of them spent their day. Her entirely family supports and never fails to appreciate what she does for the family each day by going a mile extra. Not just this, the happiest moment for Mrs. Majumdar is that her husband chops and keeps the vegetables ready in the refrigerator which she has to cook in the morning. Do you think it is a small gesture? No! That’s a real big one for a man to do this when we live in a society that has preempted conceptions.

A flamboyant lawyer by profession, Samantha from Kolkata, has never lost even a single court case. She had her career at the peak when she was 30. Here was a life to take a major and a beautiful turn. She was blessed with a baby boy. She has done away with her career as a lawyer. You would think why? She would have easily continued. Yes! She easily could have only if everything was in a happy state of affairs. Her baby is now 5 and suffers from a major dyslexia. Disheartening! Yet, she has taken up this as a challenge and gives all the 24 hours of her day to the baby. She takes up the challenge of treating her baby and is also succeeding with small steps. Mother: an epitome of warmth and care is something which cannot be replaced. Her love is pure and virgin. We salute Samantha and wish that this motherly mission be more brighter than her career as an advocate.

We have so far discussed about Misha, Mrs. Majumdar and Samantha. Did we find our own story hidden somewhere here? If not, you are a step away from feeling more abreast with the ‘Womaniya Power’ but I hope you come across to it soon.

Till then, keep celebrating ‘Womanship‘ and never forget to say ‘Thank You‘ to women who motivate you each day to wake up with a smile. Sakshi Sharma is an avid reader and writer. She wields her pen to express her views on untapped version of issues and cherishes her skills on poetry. Every work of her art is projected beforehand and assesses the impact it’s going to put on the reader. With an inborn inclination towards writing, she remains motivated to keep innovation in the bag to write in consonance with the need of the writing trends and the immediate environment. She welcomes reviews, suggestions and queries in all hail as she believes it’s in the good-hope and interest of her own field of work. Welcome aboard and cheers for the ‘Power of Pen!’
tagged with Celebrating Contribution, International Women’s Day, Womanship, Women in our Life, Women's day, Women's day 2020