Patriotism In Children: A Feeling To Be Instilled, Not To Be Taught! 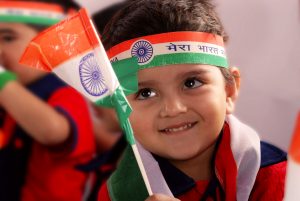 Every child at a tender age is looking up to you for knowing and understanding what patriotism is all about. Answer them graciously and give complete answers with a strong backed reason as to why loving your own country is too important a thing.

What is the meaning of ‘Patriotism’?

A feeling of belongingness, love and pride towards your nation and value it highly while wishing for it’s well-being is the true meaning of patriotism. No one-line definition can define patriotism though, but an essence of what it is all about for a child is discussed here in detail.

Amidst a mush of nation’s unrest that we are undergoing, we keep flipping channels for updated news on what’s happening or going to happen next. Kids here are at peace and do not understand that we are in the state of a national emergency. All they can know about is the games they play every day, food they want to eat and school assignments they need to complete. Nation to them is a bigger thing and needs to be understood. You might face questions from these innocent ones as to who is fighting and why. Here, you come to play a critical role. You need to tell them the difference between violence and patriotism. Two highlighting point we need to touch upon as parents and teachers are – ‘PATRIOTISM’ and ‘SELF-DEFENCE’. You need to tell them that there is more we need to participate in the nation apart from celebrating Independence and Republic Day. Furthermore, you need to control your emotions and do not use language that disgraces any other country or its countrymen because you could seed it deep in the child’s brain, maybe forever. Never tell a child that it’s a state of WAR, but just tell them that peace is important but so is ‘SELF-DEFENCE’. How critical and trick-playing can you be as a parent or a teacher will be on test here. Read on and know more about instilling a sense of pride and patriotism in a child:

Let your child know about national festivals. Tell them that days holding national importance are not just school holidays. Take them to the park and let them enjoy and participate in the flag hoisting. Accompany them as they would bombard with questions which you only can and should answer.

Tell them the history of events holding national importance so that it seeds deep into his mind as to why and how the series of events took place which has made up to this occurrence of time. Tell them that the national emergency today arose due to a lot of things happening in the past which the nation could not take more of.

Visit places of national importance like Red Fort, Wagah Border, Jallianwala Bagh to name a few. They will enjoy and learn. They will also form a tendency of linking the past with the current scenario. This will inculcate reasoning in them.

Write/Read stuff for them. Bring them books with short stories on patriotism, national festivals and their importance. You will again be flooded with questions. Cater to each bit of it solemnly. They are growing and will watch your words very carefully.

Inculcate in them the responsibilities of a good citizen. Tell them why we are following ‘Swacch Bharat Abhiyan’. Tell them about proper garbage disposal. Also, tell them that praising your own country doesn’t have to involve demeaning words for the other nation.

Update them with the news which is highly in media circulation. Answer their questions and here, tell them that the national emergency has arisen due to the intrusion of other nation in our boundaries. Also let them know that the soldiers of the nation are protecting us 24*7.

Enjoy festivals with your child. Do not forget to educate them about the struggle for independence and making of our constitution. Use no technical jargons otherwise; the efforts shall go in vain. Sakshi Sharma is an avid reader and writer. She wields her pen to express her views on untapped version of issues and cherishes her skills on poetry. Every work of her art is projected beforehand and assesses the impact it’s going to put on the reader. With an inborn inclination towards writing, she remains motivated to keep innovation in the bag to write in consonance with the need of the writing trends and the immediate environment. She welcomes reviews, suggestions and queries in all hail as she believes it’s in the good-hope and interest of her own field of work. Welcome aboard and cheers for the ‘Power of Pen!’
tagged with Patriotism In Children, responsibilities of a good citizen, sense of pride and patriotism, short stories on patriotism